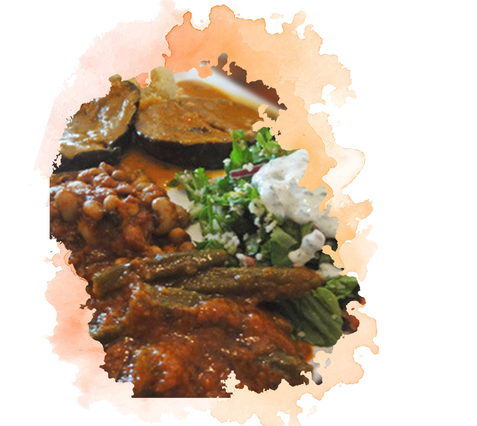 A Sudanese plate of okra & eggplant
The cuisine of the country is as varied as the country’s geography and diverse ethnic communities. Some foods are, however, consumed widely like Kissra, a type of bread which is the staple of the Sudanese diet. It is made of corn or durra. Kissra is usually consumed with a stew and together constitute the most popular everyday meal of Sudan. Stews generally have dried meat, peanut butter, spices, and dried onions as the ingredients.

Porridge made of corn or wheat might also be consumed with stews. Soups are also an important part of the Sudanese cuisine. Kawari is the most popular soup and is made of cattle's or sheep's hoofs, spices, and vegetables. A dish made of banana paste called Moukhbaza is widely eaten in east Sudan. Dairy and milk are fundamental to the diet of most Sudanese. Some popular beverages of Sudan are fruit juices, such as a drink called Hilumur  .
Check out some of the famous sudanese dishes, courtesy of   sudanesekitchen. 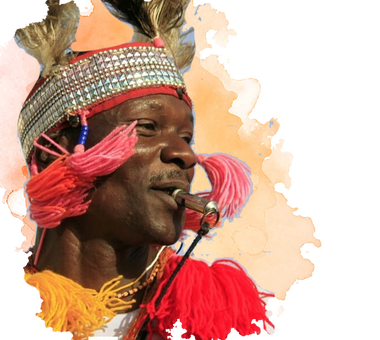 Dancer from West of Sudan
​Sudan has a rich heritage of music and dance. The rich and varied  music of Sudan  is made up of traditional, rural East African roots, as well as of Arabic, Western or other African influences on the popular urban music from  the early 20th century onwards. Since the establishment of cities like  Khartoum  as melting pots for people of diverse backgrounds, cultural heritage  and tastes have shaped numerous forms of modern popular music. In the  globalized world  of today, the creation and consumption of music through satellite TV or on the internet is a driving force for change in Sudan, popular with local audiences as well as with  Sudanese living abroad.

Check out these videos of  Sudanese American  dancers  from Shabbal  group  in San Francisco
To learn more about Shabbal  , please visit their facebook page at   https://www.facebook.com/shabbaldance/
Copyright 2020 © MySudan. All Rights Reserved.